What are the top tourist attractions to visit in Tayabas?

Top 12 Best Things to Do in Tayabas City

The Philippines is home to many wonderful, captivating, and breathtaking places. In fact, some of these places are just a few hours’ drive away from the Metro. One such place is Tayabas City, in the province of Quezon, just south of Manila.

This town features cheap gastronomic fares, UNESCO-worthy churches, and heritage houses that you shouldn’t miss if you happen to visit the city. To provide useful information to the readers, here are 10 activities to enjoy while in Tayabas.

Things and Places to See and Do in Tayabas City

When visiting a new place, most travelers are sampling local foods, so make sure to drop by Kalye Budin to sample the “Budin” or cassava cake. It’s a perfect pasalubong since it has a 2-3 days shelf life, and it’s also affordable.

Another gastronomic treat native to Tayabas is the sweet and salty yema cake, particularly Rodilla’s Yema Cake, a local brand that has grown popular in recent years that actually originated from Tayabas.

This is the biggest Catholic Church in the entire Quezon province. Its captivating key-shaped architecture is one of the many things that draw people to it. Built in 1585, Minor Basilica of St. Michael the Archangel became famous for having the longest aisle and centuries-old church bells.

It also boasts of a clock in the belfry, which is thought to be one of the oldest in Asia. On July 31, 2001, the Basilica was declared a National Cultural Treasure by the National Museum of the Philippines.

The Mayohan Festival is an annual festival commissioned by the city government each month of May. The main purpose of this festival is to foster solidarity amongst the locals of Tayabas. The festival lasts for nine days and usually takes place on May 11 to 18.

The old cemetery chapel in Tayabas, also known as Mortuario de Cementerio de Los Indios, is famous for being one of few cemetery chapels in the Philippines with two belfries.

Its Gothic architecture is one of the many things that have endured the old cemetery to locals and tourists.

Declared a National Historical Landmark in 1978, Casa Comunidad de Tayabas is actually the town’s old tribunal. It is also one of Tayabas’ most famous landmarks.

This was where Apolonio de la Cruz, better known as Hermano Pule, was sentenced to death by firing squad.

This Kamayan sa Palaisdaan restaurant is a haven for seafood lovers. It’s also one of the favorite stopovers of people traveling to and from Tayabas. It comprises several nipa huts propped up on bamboo stilts in a huge pond.

Among the delicacies served in this restaurant are Inihaw na Pla-Pla, Inihaw na Hito, Grilled Squid, and Crispy Beef Tadyang.

It’s a fact that there are quite several centuries-old bridges in Tayabas. However, Malagonlong Bridge stands out from the rest because of its size.

This 5-span 445-feet long bridge is the oldest in the entire Quezon province. It is also touted as the longest “Spanish” bridge in the Philippines, as it was built in 1840 during Spain’s colonial era.

Don Diego Urbano built this bridge in 1823. The bridge traverses the Alitao River and is composed of two arches made of adobe. It’s considered a historical sight in Tayabas, and therefore, worthy of a visit or two. 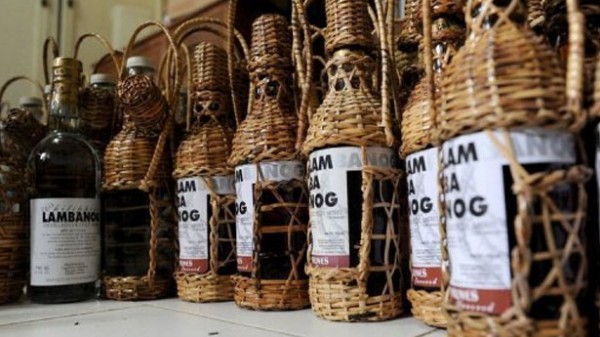 Your trip to Tayabas won’t be complete if you don’t drink “lambanog” (wine made from coconut that carries 80-90 proof potency variations).

Tayabas is one of the many places in Quezon where drinking lambanog is already part of their culture. This famous alcoholic drink is also produced in local coconut vodka distilleries.

This natural hot spring has been converted into wading pools and is considered the only hot spring in Tayabas. It features some roofed pools to relax and enjoy meaningful conversations with your friends and loved ones.

One of the oldest churches in Tayabas. Locally known as Ermita Church, the chapel was built in 1838. In 1887, the chapel was described as having a small cloister, a modest presbytery, and a sacristy to the right side of the presbytery. The walls had four windows of capiz and glass. In March 1945, the chapel was destroyed due to American bombings and only the walls remained. However, the walls served as a guide to its eventual restoration.

Built in 1855, the church was called “Cementerio de Los Españoles” during the Spanish period. A former cemetery and now a place for devotees of San Diego de Alcala.

These are just 12 of the awesome things and places you can do and see in Tayabas City. If you want to find out what else the historic city has to offer, make sure to include it in your bucket list of places to visit within the Philippines.

Come to Kerala: The Backwater Trail