Top 15 Tourist Spots and Best Things to Do in Pamplona, Spain

It is hard to talk about Pamplona without mentioning the Bull Run, or San Fermin Festival, an event that usually leads to an eruption of a joyful atmosphere. During this crazy time, there are bull runs, in which tourists, as well as locals, avoid getting packed down or gored by prowling bulls and steers.

Below are 15 best things to do in Pamplona Spain.

Top 15 Best Things to do in Petropolis, Brazil

Bucket List: Top 15 Best Things to Do in Kuantan, Malaysia

This unusual citadel is located in the Vuelta del Castillo Park, it is star-shaped designed and built after gunpowder adoption by European armies.

The construction began early in the 1570s and continue to 1645, although some more extensions were made later to strengthen the outer walls.

This building is highly revered by the people of Pamplona, and they usually refer to it as their el Cuarto de estar or living room. Plaza del Castillo is the major epicenter of the social life of the people of Pamplona. It carries significance in the history of the city, as since centuries ago, has been the venue for military parades, political protests, and at some stage bullfights (until 1843).

The museum is the latest artistic project in the city of Pamplona, which has drawn comparisons from the Guggenheim Museum in Bilbao. The museum has global dimensions. The daughter of the Spanish impresario has been the main driving force behind the museum’s collection. Maria Josefa Haurte famously donated art paintings including works from Picasso and Kandinsky. The University of Navarra has also thrown its support behind the museum by contributing its archive art materials.

The festival is known worldwide. It takes place in the second week of July each year. San Fermin has put Pamplona in the world’s tourist map, single-handedly, despite the local government and the media efforts to push forward other aspects of the city’s culture. If you are in the city during this time, take part in this controversial, yet an adrenaline-charged event of San Fermin. Alternatively, you can just spectate by renting out flats with balconies along Calle de la Estafeta for the finest vantage viewpoint.

Marvel in the Ancient City Walls

Since the Roman era, Pamplona has been strategically enclave, though sections of the fortress had to be knocked down by the Spanish army due to the bulging population of the city. The remaining bulwarks still majestically stand and you can come by and witness the historic remains of Pamplona.  During summer, visitors can relish the reenactments of ancient battle scenes and numerous concerts. While here, don’t miss out on visiting Fortin de San Bartolome.

Walk in The Riverside Park

The park occupies around 90,000 square meters, and it is the lung of Pamplona. You can enjoy leisure walk or jog along the 17 kilometers pathway winding the banks of River Arga, Elorz, and Sadar. You can also try fishing here. When you are done, just walk over the bridge and head into the city’s serene countryside for fresh air.

The planetarium was built in 1993 in the Yamaguchi Park. This state-of-art planetarium has attracted over 200,000 visitors annually. Some of the major expositions projected here include the origins of the universe and cutting-edge findings in the field of astronomy. The Tornamira Hall, with its 20 meters diameter dome is one of the largest in the world. If you are a science geek, this place will fascinate you, with its all-weather activities.

Located 10 kilometers from Pamplona, in the town of Alzuza, this memorial museum pays homage to the fine works of Jorge Oteiza. The most notable exhibitions include the ones which formed part of the series that won Jorge Oteiza the Grand Prix for Sculpture at Biennial, Sao Paulo. Enjoy the gorgeous view of the Pamplona city over the avant-garde red-panel museum building that rises on the southern slant of Alzuza.

This is the place where pilgrims pass on their French Way walk. You can also follow the footsteps of the pilgrims, just for the thrill, and you will witness numerous religious significant monuments along the road. You can start off at the Magdalena Bridge, carrying a stone cross bearing the image of Saint James. You will eventually enter the city via the Portal de Francia.

This structure is set within the Casco Antiguo and was constructed between the 16th and 17th centuries to defend against incursions by French. Much of its unique pentagonal shape is still pristine. During the festival of San Fermin, you can witness magnificent nightly fireworks at Parque de la Vuelta del Castillo or just take a casual walk or jog on a nice evening.

This 17th-century building is the Pamplona town hall. The building is flanked with flags oscillating from the façade. You can walk northwest of Plaza del Castillo to find Ayuntamiento. It was built on an old moat site, where three of Pamplona defense systems met once. This building will fascinate you with beautiful Baroque façade of tawny sandstone topped by lions holding coats of arms an angel blowing a trumpet. 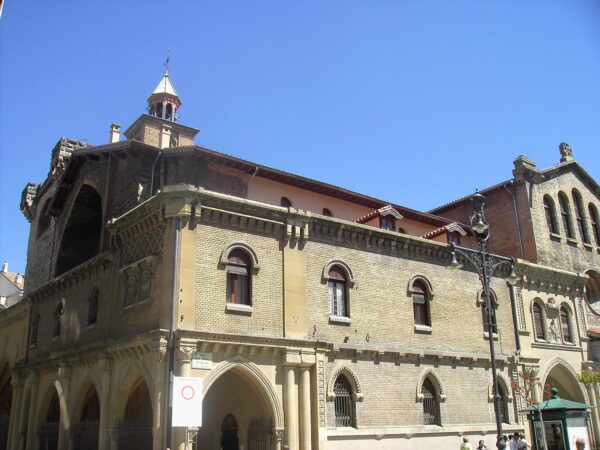 This building lies about halfway along Paseo de Sarasate, a stylish broad avenue lined with epic buildings. Iglesia de San Nicolas was built in the 12th century as a Romanesque church and remain the only Pamplona church to preserve its Romanesque structure.

The Plaza de Toros is situated on the Paseo de Hemingway and serves as the city Bullring. In front of the building, you will find a monument honoring Ernest Hemingway, a respectable author, and a great bullfighting aficionado.

Iglesia de San Saturnino is among Pamplona’s emblematic churches. It was built between the 13th and 14th centuries. The church adopts different styles, with the tower representing the Romanesque architecture while the rest of the church exemplifying the Gothic style.

Book your evening at the Baluarte Conference Center

Baluarte Conference Center is situated at the center of Pamplona and sandwiched between the bustling shopping district and the Citadel. This cultural center stages operas, classical ballet, as well as theater performances. The center also has state-of-art audiovisual equipment and the seats offers a perfect view of the stage from whatever angle of the house.

Check out our complete list of recommended Hotels in Pamplona, Spain via Agoda or you may also see available Airbnb properties in the city.

Team Out of Town

2019 Pingxi Sky Lantern Festival, Taiwan – All You Need to Know