In an article from ABS-CBN, a ship from Palawan to Kudat Port (3 hours away from Kota Kinabalu, Malaysia) will be launched this February 2018. This project of the local government aims to boost the economy and tourism in Palawan.

According to the Palawan local government, that from the Buliluyan Port at Bataraza, Palawan, travelers can now ride the Fast Cat Ferry going to Kudat Port, Malaysia. It is also reported that the 2 ports feature own customs, immigration, quarantine and security centers to process travelers’ documents.

The announcement of the newly opened route was implemented in the talks of the Provincial Government of Palawan, Brunei Darussalam-Indonesia-Malaysia-Philippines East ASEAN Growth Area Business Council, and some officials of Malaysia.

Features of the Fast Cat Ferry 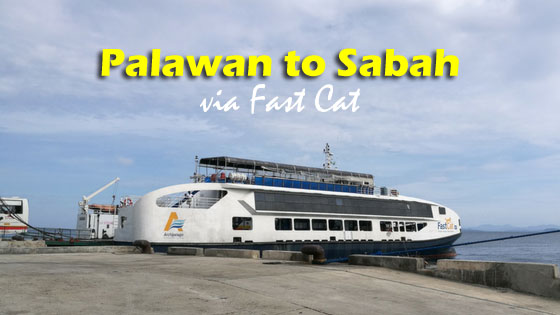 The Fast Cat Ferry is said to accommodate 200 passengers and 30 vehicles onboard.

In an interview with Palawan Provincial Information Officer Gil Acosta, he said that the ship routes are included in their infrastructure projects, along with the 6-lane highway, roll-on and roll-off (RORO), and RORO in Northern Palawan. A total of 3 RORO are included in their project for connecting, as they envision their province to be a trade route.

In a report by Inquirer last April 2017 during the press briefing during the 30th Association of Southeast Asian Nations (Asean) summit in Manila, Tugade announced that he had initiated discussions with his Malaysian counterpart for the possible sea route. He said that the idea was to replicate the arrangement with Indonesia for the Davao-Gensan-Bitung route, which would be serviced by a roll-on, roll-off vessel.

Like Palawan, Kota Kinabalu in Malaysia is bustling with beaches and is surrounded by rich rainforests. In some report, it is said that Sabah’s tourism industry is set for a big boost with the launching of the roll-on roll-off ferry (RORO) service between Kudat and Palawan in the Philippines next month, says Joniston Bangkuai of Sabah’s Tourism Board.

6 hours of travel time is estimated to reach Malaysia. The trial run of the Fast Cat Ferry will be done in the first week of February.

24 Hours in Paris on Christmas Day