If you ever dreamt of going back through time and reliving Jack and Rose’s moments on the maiden voyage of Titanic, then the Titanic Museum Attraction in Pigeon Forge should be on your bucket list. Now, guests can experience what’s it like to walk on the luxury hallways, cabins, the grand staircase, and cabins, making it feel like its 1912 all over again.

Pigeon Forge (location details) is a mountain resort city nestled in Sevier County, Tennessee, in the southeastern United States. It is home to wax museums, outlet malls, amusement rides, and now, a place for die-hard Titaniacs.

In a written by delish.com, it was reported that founders of the Titanic Museum Attraction are husband-and-wife duo John Joslyn and Mary Kellogg. They launched the museum after Joslyn produced a TV special on the ship’s recovery titled “Return to the Titanic…LIVE”. The TV special was shown in 27 countries worldwide in 1987, propelling it as one of the highest-rated syndicated specials of all time.

Be A Titanic Passenger

Reminisce the majestic grandeur by first getting your boarding pass of an actual Titanic passenger or crew member. Inside, the ship is surrounded by more than 400 artifacts directly from the ship and its passengers. So imagine how people and experts got into a 12,600 feet below North Atlantic just to salvage some artifacts from the wreckage.

The artifacts on the museum are on display for the first time in the world. It is valued at over four and a half million dollars. Included in the collection are rare photographs, silverware, deck chairs, and even listen to stories told by real survivors.

Inside the Titanic Museum Attraction is the Titanic Memorial Room where 2,208 names line this historic wall. Also, you can visit and shovel coals in the Titanic’s Boiler Room.

Going back to the ship tour, visitors get to touch a real iceberg and a 28-degree water where passengers used to face 100 years ago. There are also third-class hallways and even third-class bedroom for 4 people. You’ll be amazed at how the first-class sitting room was intricately made – with a fireplace, top-of-the-line wall design, accented by quality chairs.

Let’s talk about the Grand Staircase, shall we? The famous staircase, which is a perfect replica of the 1997 movie was constructed from the original Harland & Wolff plans with its oak carvings, gold-leaf accents, and cherub statue. Not only that, remember the glass dome ceiling shown when Rose was down the staircase? It’s also perfectly re-made! Even the floor was made of something said to be expensive for 1912.

Plus! Girls are going to love the “Heart of the Ocean” style necklace which is for sale in the gift shop.

Dine at the Royal Banquet like Jack and Rose Did

For the main part of the tour, visitors can get to experience dining like Rose and Jack through Titanic Museum Secret Dinner.

From there, servers are dressed formally making the 1912 air more surreal. The tables are even arranged with impeccable flower arrangements. Not just that, according to the Christina Swemley, the Executive Event planner, said that they serve an amazing selection of menu any time of the day.

Did you know that you can also book this place for your wedding, birthday, and corporate venue? Just head over to their official website www.titanicpigeonforge.com for more details and inquiries. 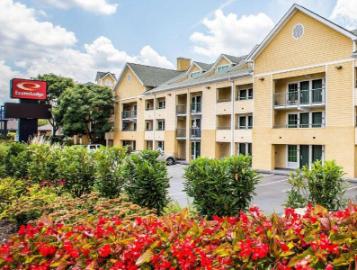 The Titanic Museum Attraction isn’t just any place for entertainment but is a realistic and an interactive experience for people of different ages.