Xi’an Dongyuan “WeiYang Impression” stands out among thousands of candidates from around the world, not only because of its globally design teams, to build high-standard human settlements with international mastery standards, but also due to the core of the building’s history. The city’s longing for the future makes the building full of vitality, so it has been highly recognized by the global architectural professional field. 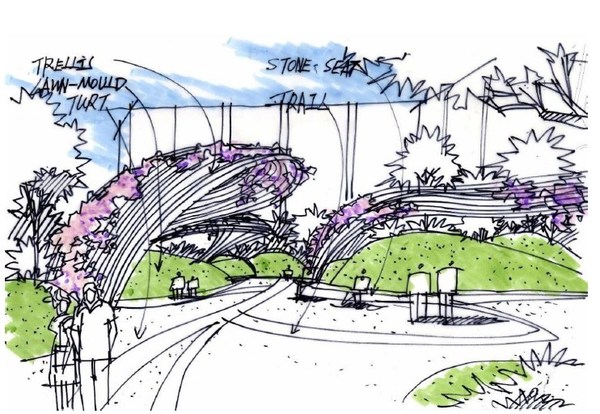 1. The blend of natural ecology and architecture

Excellent work is to seamlessly integrate the local environment into the architectural design. When living is no longer just living, it can be placed in the building, and it can have more relevance and interaction with the urban environment, so life has many possibilities with infinite imagination. In the planning, nature is used throughout to break through the existing urban relations, and the breadth and depth of the ecology are interpreted more completely, symbolizing the modern declaration of the community connecting nature.

The earth produces human civilization due to water, living near the water, and choosing the water to be the neighbor. It is the most desirable state of life in the world, and there is a sentence in the Analects called “Wise Man Wish Water”, which reflects the philosophy of life from the water, which reflects the harmony of water and human habitation.

Xi’an Dongyuan Weiyang Lake’s works are only 40 meters away from the lake shore. It truly realizes the ideal of living on the lake front, not only in Xi’an, but also in the world, it is only 0.8% scarce. From the physical form of water “solid-liquid-gas” to the ideology of the water environment, observing the water and enlightening the Tao, reflecting the self, and innovating the supreme ideal of global lake residence.

Solid state: With tassel crystal ice sculpture, it simulates the tendency of falling water, and feels the majestic momentum of water in the crystal clear and flowing water.

2. The spirit of Bhuttoism makes a house that breathes

The ecological environment has a great influence on the quality of human settlements. The five senses of human vision, smell, hearing, touch and the natural environment are closely related. The Bhutto idea in Europe in the 1970s advocated an in-depth interpretation of territorial human history and ecological environment. Including the evolution of animals and plants (birds, insects, vegetation), as detailed as the study of wind, only by thoroughly studying these details and applying them to practice, can we truly form an epoch-making work.

From the perspective of architectural space planning, this award-winning project has left a space for natural wind to flow in the limited space of the city, and the temperate monsoon climate blown from the northwest, with the humid and moisturizing east coast of the mainland It is a dry city in the northwest; at the same time, it considers the design of the largest daylighting surface and selects the most advanced international public glass curtain wall material to extend the full day sunshine to meet the full imagination of the residents of the north on the ideal of the sun.

From a landscape perspective, the low-density architectural form, in addition to maximizing the public landscape space, can also enjoy exclusive private space, six large courtyard spaces, a pro-yang garden courtyard, a sky terrace courtyard, and a balcony that interacts with nature.

3. Unity of Heaven and Man — the supreme state of architecture and human settlement

Affected by the profound and profound influence of Chinese culture, the lifestyle of the unity of man and nature has become a common aspiration of human settlements around the world.

Garden aesthetics is a part of Chinese people’s life philosophy. It pays attention to the integration of houses and landscapes. People live in it as if they live in nature, breathing and growing together with nature. The creation of a scene for the whole age space is also based on the perspective of human care to adapt to nature,

Let the elderly, children, adults enjoy themselves and maintain an appropriate distance, this kind of living building called “the unity of heaven and man”, conform to nature and integrate differently.

Once, the birthplace of oriental civilization, Xi’an, China, possessed the treasures of the Tang Dynasty culture. In the future, Eastern history and Western international aesthetics will merge and regenerate. Architecture and nature, human settlements and the environment, the concept of “Taoism, Nature and Man in One” will create lofty ideals, and architecture will radiate life. This is also the reason why the Organizing Committee presented this award.